This past week, President Trump announced that it was being considered and reviewed that overcrowded detainment facilities would be relieved by releasing (by court order) the illegal immigrants into sanctuary cities and states. Of course, the Leftist Mayors, Governors, and various Congress-critters predictably howled with outrage, charging the President with almost every accusation under the sun.

Quite frankly, I’m sitting back with equal parts being amused, laughing, and somewhat sad.

Which is it? Open city or closed city? Good illegals or bad illegals? President Trump has the Left holding their pants up in the corner that they have put themselves in with no way out. It’s about time someone has shown these morons what hypocrites they really are.

The sad part comes into a couple of categories.

The first is for the immigrants themselves. Most, not all, are looking for nothing more than survival and a better life. I fully understand that, but that’s where my sympathy ends. Crashing through a country’s border and then having to look over your shoulder for the rest of your life is no way to live. You would always be illegal, and probably being taken advantage of as well. There are better ways to do this the right way.

The second are for the citizens of the towns, cities, and states (mostly in California) that have declared themselves as sanctuaries for the illegal immigrants. I don’t know if the citizenry voted/approved of the sanctuary status for their locations, but I’m fairly sure that once the influx hits, job availability will go down, wages will go down, and crime will go up. I’m sure that once the pain hits, the citizens will want change, but I’m not wholly sure if they will connect the actions of their elected officials with the problems and vote someone in that isn’t a Liberal Democrat.

In other words, they are hurting thousands of people, citizens and illegals, to acquire power. Folks, that’s a type of cynical evil that I’m appalled at.

I hope that the people of these cities, towns, and states stand up to this evil, shout “Enough!!”, and can these twits as soon as possible. The sooner they wake up, the better.

I have my doubts that will happen anytime soon, but that’s another post for another time.

Watching the WAH! Party* (formerly the Democratic Party) over the past few weeks has led me to the conclusion that these people are under the delusion that they believe that they should be the only political party in the United States.  The amount of arrogance of these people in their quest for political power is almost unbelievable in its scope as it is in the levels of duplicity and deceit.  For example:

WAH! Party member Senator Schumer believes that precedence should only be to his Party’s advantage and no others.  He is demanding that his fellow Party members filibuster, obstruct, and vote against one of the most qualified Supreme Court nominees I have seen in some time.  He is also demanding that 60 votes are required to approve the appointment of Judge Neil Gorsuch.  My response would be this:

Senator Schumer, I dare you and your fellow WAH! Party members mount a real filibuster and get up in front of the American people & speak as to why this most qualified person should not be elevated to the highest court of the land.  I want you to explain plainly the reasons for your obstructionism to the due process and precedence that you yourself championed when your power held both Houses of Congress and the White House.  Last, acknowledge that 60 votes are not needed for consent as two current Justices (Justice Alito with 58 votes, Justice Thomas with 52) were approved with less than the 60 votes you state are necessary.  After exposing yourself and your party as being crying, whining children, please remove yourselves to your designated safe space and let the adults vote.

And to Senator McConnell – enough with the tap-dancing.  Change or amend the rules to approve the nomination and move on with the other business of the Senate.  The WAH! Party has not proven that they will play fair or keep their word in the past, and there is no reason to believe that they will now.  To accentuate this last point, the rant of the newly elected WAH! Party Chair Tom Perez against your party and the President is telling.

The flap about Russian hacking into the election and supposed collusion with then Candidate Trump’s campaign is another issue.  To those accusers – produce and release hard evidence with source references now to the American People via all news agencies.  In you cannot, then STHU because you are no longer relevant.  This crap with unsubstantiated accusations is not productive, especially since the former Democratic Presidential nominee has been shown to have violated multiple Federal laws and has not been prosecuted (yet?), and has made multiple deals with the Russians for personal gain.

Last, the ruckus over illegal aliens and sanctuary cities is absolutely insane.  WAH! Party controlled cities are declaring that the rights of illegal aliens (lawbreakers) supersede those of legal citizens.  The Mayors who declare such nonsense are breaking their oaths (and multiple Federal laws) to the people that elected them in the first place, and putting their citizens in danger (see New DHS Report Reveals Sanctuary Cities Are Releasing Violent Criminal Aliens by Leah Barkouskis).

To the Republicans – the WAH! Party has declared war upon you and the American People that elected you to represent them.  What is your response?

* WAH! Party stands for Whiners And Hypocrites, of which the Democratic Party has become.

The hoopla over the past week over the illegal immigration issue and the supporters continued this past week, and probably will for a while.  It doesn’t matter if President Trump does exactly the same thing as his predecessors in ordering law enforcement to round up and deport illegal immigrants or not – his opponents will continue to oppose his every move, and call him every name in the book.

May I remind the members of the WAH! Partytm of what then President Clinton did through his AG Janet Reno with the following picture?

And yet, only in California can an illegal act take precedence over public safety: 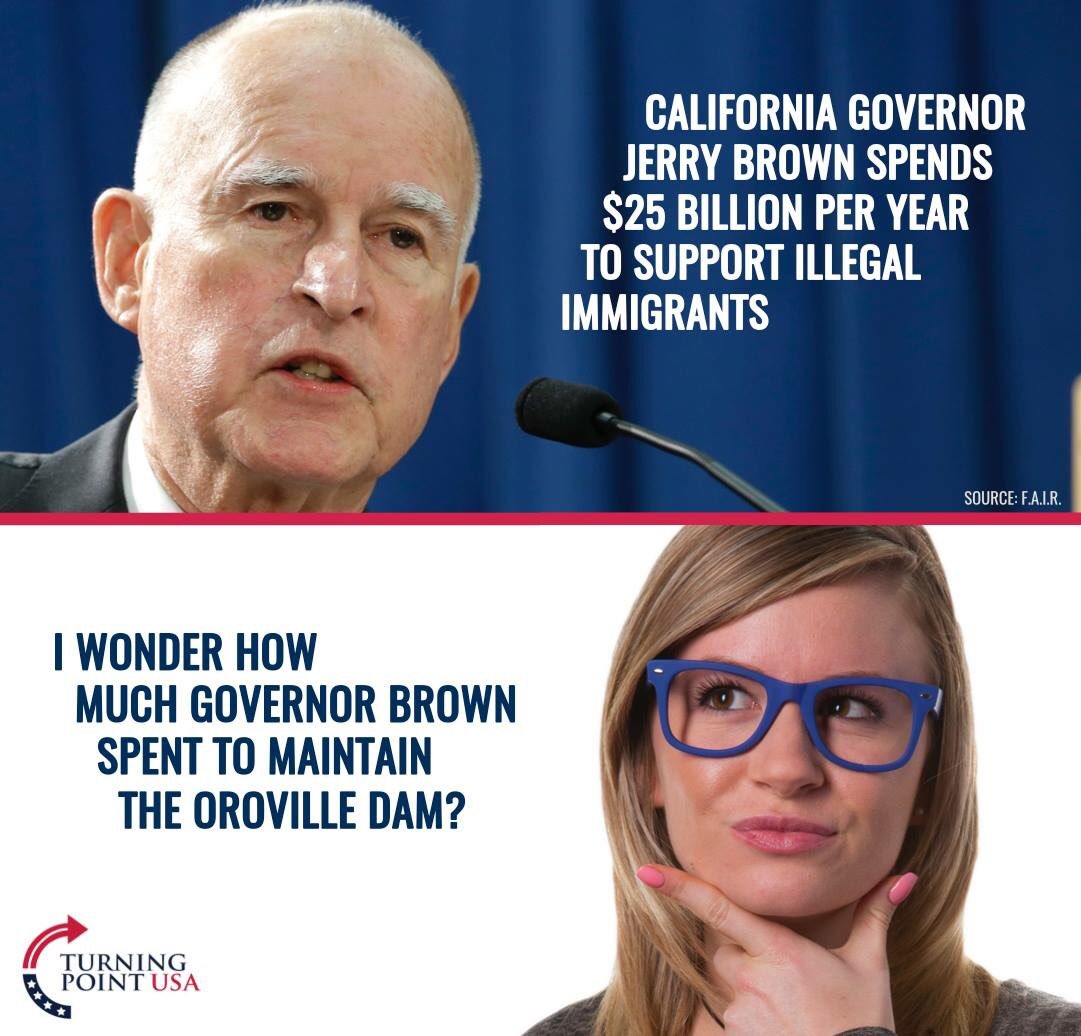 The WAH! Partytm continues it’s opposition to every nominee to President Trump’s Cabinet, delaying every appointment as long as possible.  Quite frankly, it’s disgraceful – in the Harvard-Harris poll provided exclusively by The Hill:

The survey found that 73 percent of voters want to see Democrats work with the president, against only 27 percent who said Democrats should resist Trump’s every move.

Enough already – your actions are an embarrassment to all Americans and diminish your Party’s credibility.

Fake News – defined as making up news stories to fit a particular agenda.  Literally hours after President Trump accused the Media of faking news in an unprecedented one-on-many unscripted news conference, the Associated Press published a news story that stated that the President would call up the National Guard to round up all illegal immigrants.  The story has been categorically denied by the White House, and has been debunked by several other sources as well.

But the media has claimed it’s first victim – Michael Flynn – through leaks from the Intelligence Department.  As pointed out by President Trump in his news conference earlier this week, such actions are illegal, and would be investigated.

Last, a personal thought – As disgusting and tiresome as it may be, I do hope that the WAH! Partytm through their surrogate Progressive Liberal Democratic Party and supporting Media outlets continues their antics and p****s off every American from now until they lose every single office from the local to the state to the Federal level.  Perhaps then we’ll get rid of the cancer that is known as Progressivism.