It seems that no matter how much they are losing respect the democrats, and sadly some of the republicans too, can’t seem to get it through their thick skulls of mush that they work for the people, not the other way around.

The election of 2016 beat Hillary Clinton, and true to form, since she supposedly won the popular vote, but lost the electoral vote, the democrats started working to overturn the will of the people and take Trump out of office. Yet that is not the worst of it all.

Since the moment that Donald Trump *citizen* decided to run for president, the democrats and the leftists in this nation went to war. Not against our enemies mind you, but against the American people. 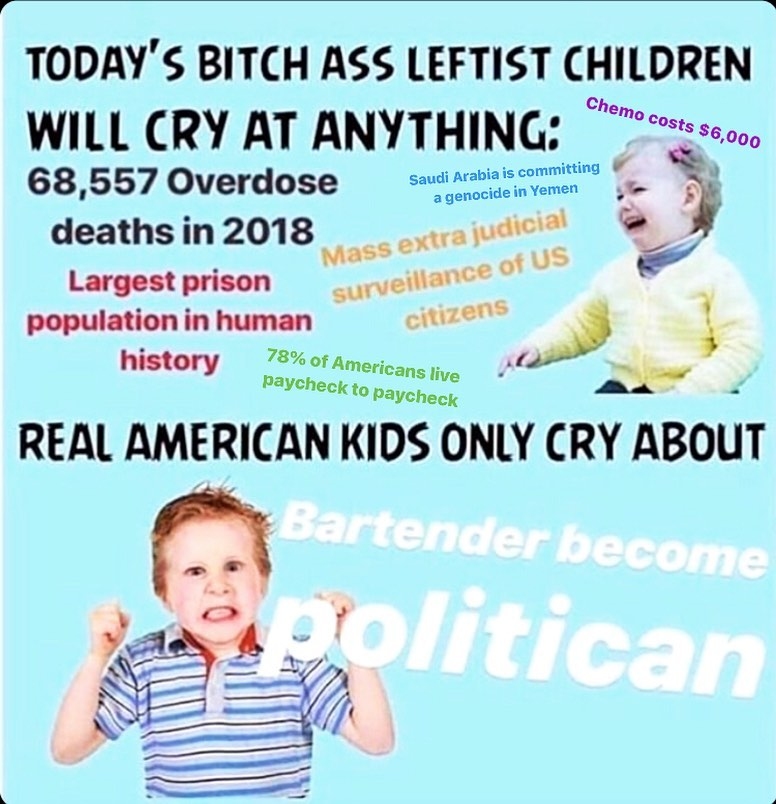 Anything and everything a republican, or a patriot said, was suddenly “racist” or “treasonous” or something like that. *The reason for the photo above* . Yes my friends, it got that ridiculous. The sad part of this is, the democrats got to that point, and stayed there. And sadly it will get worse.

The will of the people didn’t matter, because their precious Hildabeast lost. It was because Trump “colluded with Russia”, until that was debunked, then it was a phone call to President Zylenski of the Ukraine! Of course, when the President, both Trump and Zylenski said there was nothing wrong with the phone call, the democrats *unimpeaded* moved on to the next. Tyranny. When that was debunked, they moved on to the next. Bribery. Folks, let’s get this straight.

The ones that are committing all of these offenses against America is not Donald Trump. It is the democrats. The leftists in this nation who cannot get over being beat and therefore have decided to take the mantle upon themselves and force the issue.

The issue? That the American people do not know enough of how to run the country, to know who they voted for. Therefore, it is up to the democrats to solve the provlem for us.

This last week, the democrats have lost battle after battle, and President Trump has declared the war over, but the democrats, over the objections of most all of the sane people, have decided to move on with their treachery. And treachery is just what the democats have up their sleeves.

The only time that the democrats will ever talk of the rule of law, or the Constitution, or our ‘so called’ democracy is when they are not getting their way. And right now, they are not. Even by their own actions!

yet, they will not learn to shut the hell up and let things go. They will not start working on trying to win the next election. NONE OF THAT MATTERS now because President Trump is the president and they do not like it one little bit. So winning the next election is not in the cards for them. Only getting Trump out of office is.
Now, here is the problem with the democrats as I see it, and you can take this to the bank.

When the 2020 Presidential election comes and goes, and Trump beats out all of the democrats who are running against him…..this whole fiasco that is going on now, with the democrats making up story after story to take Trump out of office, will not stop. It will continue. Until the times comes that Donald Trump is not in the White House anymore. Until the time comes that a democrat again resides in the White House. Then, they will work overtime on reversing everything Donald Trump has done to make our economy roar, and they will take credit for the good economy, while doing their best to destroy it again, while blaming the republicans for everything that WILL GO WRONG. Mark my words. This will happen. And everythign bad that will happen to this great nation will be because of the democrats, and of course the rino republicans who cannot seem to find their backbone to stand up against these socialists who want nothing but to destroy this country.

It’s time the republicans started fighting back like Representative Jim Jordan has been, because there is nothing the republicans will ever do, that will put them on the good side with the demon-crats. PERIOD. War has been declared on the United States, and her people, and it’s time the Repbulcians took up the weapons they have available to them, and start fighting the enemy. And the enemy of all of this stuff American is the democrats. They are the ones who are trying to destroy our Republic. Not the republicans. The only thing the republcians are guilty of now is not having the backbone to fight back….we need more like Jim Jordan.

God Bless America
God Bless our Troops
And remember….WE WILL NOT BE RULED!