“They who can give up essential liberty to obtain a little temporary safety deserve neither liberty nor safety.” – Benjamin Franklin

For the past week, I’ve heard debates, reasoning, and posturing on the NSA’s “Prism” program, and quite frankly, I’m tired of the bloviating.  The bottom line is that the Government has been collecting data on the American People with the justification of the Patriot Act in order to stop terrorist attacks.

In my humble opinion, that hasn’t worked out so well.  The Fort Hood shootings and the Boston Bombing are but  two examples of where this “preventative” program failed despite multiple phone calls and emails that showed destructive intent.  And yet, the Administration mouthpieces state that “dozens of attacks” have been prevented.  While this may be very true, I still have a hard time believing that our Government is  telling the truth and really keeping the American People safe (think of Benghazi & what was done to keep our Ambassador safe, and perhaps you’ll understand).

From a historical perspective, governments have always tried to find out secrets from other governments, and even it’s own people.  Knowledge is power.  If secrets are found out and communicated to the right people, disasters can be avoided.  This is true in peace and war.  However, this is the United States of America, and as such, the citizens are protected from unnecessary intrusion into our lives.

“The right of the people to be secure in their persons, houses, papers, and effects, against unreasonable searches and seizures, shall not be violated, and no Warrants shall issue, but upon probable cause, supported by Oath or affirmation, and particularly describing the place to be searched, and the persons or things to be seized.” – Fourth Amendment to The United States Constitution

What are our “effects”?  I personally think that this is any personal information that you or I have about our personal affairs, whether it is phone call records, Internet usage, books checked out from the local library, bank statements, credit card statements, etc., etc., ad nauseam…  In other words, EVERYTHING!

But our President states:

“I think it’s important to recognize that you can’t have 100 percent security, and also then have 100 percent privacy and zero inconvenience. We’re going to have to make some choices as a society,” – President Barack Obama

Really?  Do you, the average citizen, really want to have the Government be your nanny or Big Brother looking over your shoulder, making sure that you are a good boy (or girl)?  I sure don’t, and it’s bad enough the federal government spies on us. Must it insult our intelligence too?

”He that’s secure is not safe.” – Benjamin Franklin

I’m not going to debate whether or not Edward Snowden’s exposure of the NSA program was right or not, nor if he performed a traitorous act.  What he did do is remind us is that Government is there, watching.

But who is watching the watchers?

Government does not have our rights at the forefront of it’s agenda.  It’s priority is to grow and to prove to it’s supporters (the taxpayers) that it is essential to everyone’s well being and safety.  Otherwise, why are there constant attacks on the Constitution and the Bill of Rights?  To violate the Constitution and the Bill of Rights successfully is to gain more power for Government.  After all,

So how does the Government gain power?  Knowledge. Information. Coercion and intimidation of political opponents.  Legal abrogation of Rights & Responsibilities.  Threats to Safety & Security.  Legal control over healthcare and financial assets.

The political elites have a vested interest in keeping power over the People in order to conduct business as usual.  We are seeing the beginnings of an out of control Government with the recent exposures of political targeting by the IRS and other agencies.  All one has to do is look at the legislation passed in the past 10 or more years, and one can see a pattern of increasing government control and less control of the People.  From Reason.com.

Americans have learned nothing from the last 40 years if they have not learned that the executive branch — regardless of party — will interpret any power as broadly as it wishes. Congressional oversight is worse than useless; it’s a myth, especially when one chamber is controlled by the president’s party and the other chamber’s majority embraces big government as long as it carries a “national security” label.

Obama says, “If people can’t trust not only the executive branch but also don’t trust Congress and don’t trust federal judges to make sure that we’re abiding by the Constitution, due process and rule of law, then we’re going to have some problems here.”

That’s wrong. If the politicians’ only response to revelations that they’re violating our privacy is to ask for trust, then we already have problems.

When Government says, “Trust me,” I already have my reasons not to. 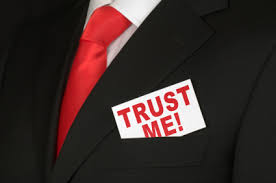 Tom Roland is my pen name for this blog. With that in mind... EE for 35 Years, Two Patents - now a certified PMP. Married twice, burned once. One son with Asperger's Syndrome. Two cats. Conservative leaning to the Right. NRA Life Member.
View all posts by Tom Roland →
This entry was posted in Political and tagged NSA, Privacy, rights, Security. Bookmark the permalink.

2 Responses to Safety and Security